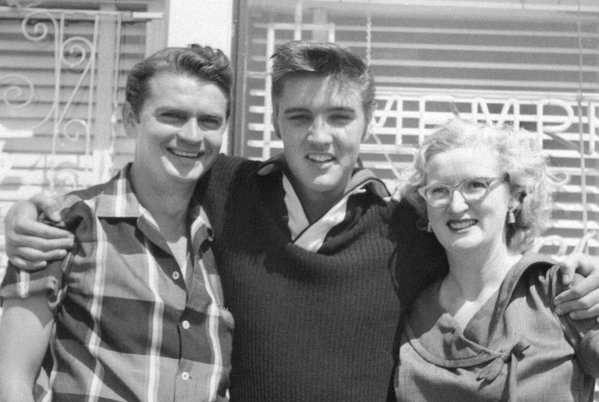 I recently researched Marion Keisker, a woman known for helping Elvis Presley early in his career while she worked at Sun Records/Memphis Recording Service. Marion is sometimes credited for recording Elvis for the first time (which is what caught my interest in her story). Her boss, Sam Phillips, also claims to have done the first Elvis recording.

We may never definitively know who did the recording because all three people involved have passed away.  At the end of the day, it  may have been a matter of flipping a couple switches. But, what’s interesting about this story is that Marion could have done the recording. Even if she didn’t, there weren’t many recording studios back then let alone women working in them which still makes her story incredible. Why is she so often credited as Sam’s secretary or personal assistant, then?

Life at a recording studio

For anyone who hasn’t worked in a recording studio, it’s far from a normal job. A studio operates around the clock with some artists starting their work late at night. As an employee, you don’t know if a session is going to run an hour or 12 and some positions are on-call 24-7. Some weeks can be grueling (with little control over your schedule).

At the same time, it’s exciting when you’re in the room with a good artist. Some days it doesn’t feel like work at all. An old boss of mine put it well: “This isn’t a career path – it’s an addiction.”

There’s a sense of camaraderie and shared experience that I don’t see in many other jobs or fields (except perhaps the military). To work in an environment like that you have to be committed – whether it’s to your career, the music, or to the people you’re working with.

There’s no doubt Marion’s commitment was to Sam. She wasn’t an engineer and she didn’t know a lot about music when she took the job working for him. Marion wanted to see Sam fulfill his goal: Starting a recording studio open to all races (at a time when that wasn’t the norm). Marion helped with everything from bookkeeping to sweeping up acetate shavings from the recording lathe. Marion was asked in an interview about being referred to as secretary and she said, “It’s ok if they’ll also say I was office manager, assistant engineer and general Jane of all trades.”

Was Marion a recording engineer?

If you compare Memphis Recording Service to a modern day recording studio, Sam would be the owner/chief engineer and Marion would be the studio manager (much more than a secretary). Marion’s job would be to keep the studio operating from day to day (under the guidance of her boss). But, I wouldn’t call Marion a recording engineer because:

Marion as a tape operator

I would argue that Marion was a tape operator, not an engineer.  By many accounts she had the intelligence and capability to learn and operate studio equipment. She said to colleagues and in interviews she operated the lathe and the tape machine.

In Peter Guarlnick’s biography of Sam, Sam Phillips: The Man Who Invented Rock ‘n’ Roll, Guarlnick says he spoke to numerous people familiar with Sun’s operations who said “not only could she have operated it, she probably did.”

Looking at it from a business perspective

Marion was hard-working, willing to do whatever needed to be done, and was capable of operating equipment. Sam wanted Marion at the studio so it could be open as much as possible when he wasn’t there (when the studio opened they were both still working radio jobs at WREC). Sam’s business card read “anyone-anywhere-anytime.”

It doesn’t seem rational for a business to be open only for Marion to have to turn away simple gigs. If Marion was capable of operating a lathe and someone wanted a simple demo, why not take advantage? When Marion tells the story of Elvis’s first recording, Sam was on his way to the coffee shop next door when Elvis came in. Sam told her to go ahead and do the recording. If anything were to go wrong, Sam would have been less than a 2 minute walk away.

The counter argument to that is Sam had to uphold his reputation as the studio’s engineer. As a business owner and engineer, I am very conscious about how the people I hire reflect on me. If you went to a business expecting someone with years of experience and credits and instead got the person you saw answering the phones and doing bookkeeping, what would you think of the business?

I believe Marion knew how to operate equipment and she did it on occasion.  I’m guessing it was in the earlier years of the studio and probably didn’t happen very often. Did she record Elvis? It’s hard to say. Even Marion herself said she could be remembering it incorrectly.

Sam said in an interview that even if Marion were to record someone it would be for the purpose of playing for him. He didn’t immediately say, “Oh no, she can’t operate equipment so there’s no way she could have done it.” To me, that implies that scenario could have happened. Although, he did claim in other interviews Marion couldn’t operate the lathe.

Once the studio got established the client base changed. I doubt they were recording weddings and funerals as much once the studio had a reputation. Musicians were coming to Memphis just trying to meet and work with Sam (like Johnny Cash, who was turned away at first).

With Sam’s reputation and experience he wouldn’t put an important session in the hands of an inexperienced engineer. That might explain why no one else has come forward to say Marion was their tape op. If Marion was working in the studio alone and did occasionally do a recording, it was likely for walk-in artists in the earliest years who paid their money for 10 or 15 minutes worth of studio time and possibly were never seen again. Initially, Elvis was just another local kid looking to make a demo.

Marion is probably most known for her time working at Sun Records but that was a small part of her career. She produced many radio shows, ran a television network in the Air Force, and was a women’s rights advocate. Check out these for more on Marion: