What My Deaf Cat Taught Me About Sound 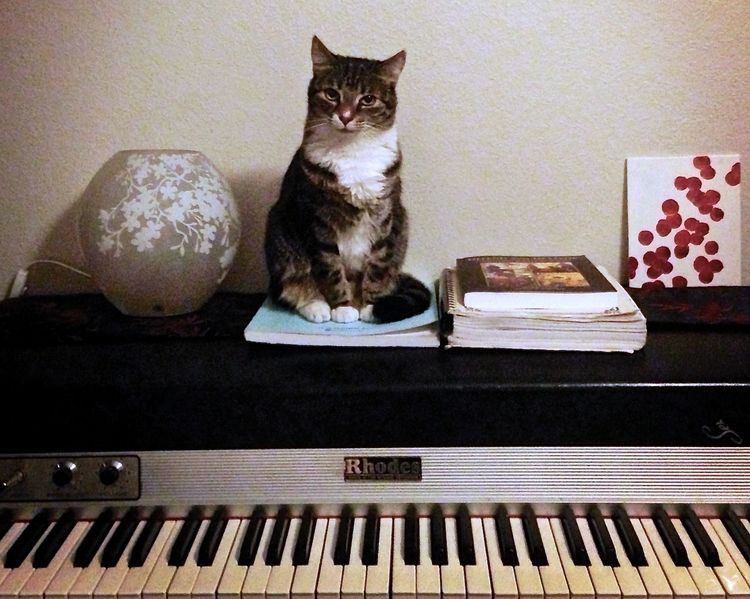 Meet Yuki, one of my cats. She’s a tiny, feisty tabby. In 2015, we learned that Yuki (6 years old at the time) had gone deaf after having normal hearing most of her life. She probably lost her hearing gradually but it wasn’t obvious until one day when I was vacuuming right next to her and she was still happily curled up and sound asleep.

There’s a learning curve to owning a deaf pet

That’s especially the case of a cat that’s already stubborn and sleeps in places you can’t find. Deaf pets get extremely startled if you touch them when they don’t know you’re there (through vibration, sight, or smell). Words they responded to before (like “dinner” or “no”) suddenly have no meaning. Yuki became cautious, spending a lot of time just trying to gauge her surroundings (such as the other cats who were unaware of her condition).

As an audio engineer, I naturally became curious and observant about what changed in her world without sound. When do we react to sound instinctually, and what is that reaction? It also made me question my own relationship with sound. Do sound engineers naturally favor sound to communicate since it’s what they do for a job?

One of the first changes I noticed in Yuki (and the most dramatic) was how much calmer she was. For most cats, a doorbell, vacuum, or an unfamiliar voice sends them running under the bed before they even know the cause of their fear. Humans have the same rush of anxiety or “fight or flight” response when a loud or unfamiliar sound catches us off guard. It’s a trick that we utilize in film sound and sound design regularly. How intense would a horror movie be without sound?

Watching Yuki, I realized that my perception of total silence was wrong.  For Yuki (who lived in silence) it brought out curiosity. When one sense is taken away, we naturally move focus to our other senses. We also adapt to changes in our environment over time so we may not be alarmed or disoriented by it. We’ve all been to a music concert that gradually got louder and louder without really noticing. Once you step outside the building (where there’s a drastic change in sound level), it’s totally obvious. The shift is what’s disorienting, not the silence.

With Yuki, we had to learn to communicate using senses other than sound. Some new forms of communication came easily, like using hand signals (waving “hello” or “come here”) to attract her by vision. If she doesn’t hear me approach, I stomp on the floor or tap near her so she feels movement or vibration. If she’s asleep, I can put food near her and Yuki will jump to alert – the same reaction as when I used to say “dinner.”

It can be hard without sound to send an emotional message. I didn’t realize how much I used an excited voice to get her to play, or talked calmly when she was being skittish. She’s become sensitive to new smells or when something familiar moves out of place, and cries loudly to let us know. Other than petting (touch), what else can you do to communicate that everything is ok? Yuki communicates by sound differently, too – she talks at full volume all the time now, so every meow sounds like distress (even if she’s just saying hello). It’s forcing me to use senses beyond sound, too, because I have to look at her body language and environment to see what she’s actually trying to communicate.

It’s up to the sender to determine the message, how to send that message (sound, vision, smell, touch, etc), and to assess how the message will be received. For example, comfort food can use taste or smell to elicit emotions, like security, relaxation, or love. But, what one person experiences as comforting might be exotic or have no meaning to someone else. A chef who specializes in comfort food has to consider: Who are his/her diners? What’s the message he wants to send, and how is it received? Sound engineers have the same consideration: How will an audience react to a sound when the intention is to provoke a specific emotion? A musical instrument that’s familiar and popular in one culture might be obnoxious and out of tune to another. A technology beep or ringtone may not have any meaning to other cultures, and it may not be relevant to our own in the future.

A message can change meaning depending on the environment, too. A warm blanket in the winter might be calming and soothing to the touch, but in the heat of summer, it could be uncomfortable and irritating. An ominous ambience sound might evoke a sense of fear in one scene, but in another, the same sound makes the audience laugh. A message can cross over senses, too. A clapping sound may not have meaning to Yuki anymore, but she still responds if she feels the air movement. A loud subwoofer in a theater is sound-based, but it could be effective because it’s also utilizing touch (vibration).

There’s a lot of interplay between senses than we pay attention to unconsciously. Isn’t the nature of multimedia to create experiences that excite multiple senses? As sound engineers, maybe we need to ask more often: Is sound the most effective sense to send a message, or is it secondary to something else? It might seem like an unusual question to ask, but what could the audience be feeling (physical sensations), tasting, or smelling? Can we impact those senses through our use of sound? It’s an interesting exercise to move the focus away from our two primary work senses (sound and sight). It’s something I probably wouldn’t have considered if it weren’t for Yuki.